Students listened to a reading of the story of The Three Billy Goats Gruff.  Responses were elicited from children regarding characters and dynamic contrasts you may expect if the goats had music attached to their character.  Students explored the timbre and dynamics of non-tuned percussion instruments, made selections and wrote music for each of the Billy Goats. 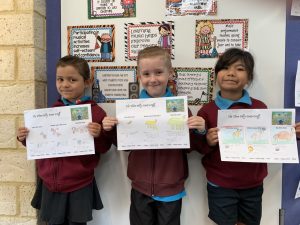 As part of NAIDOC week students listened to a recording of ‘Concerto for Didgeridoo: Water’ by Sean O’Boyle and were asked to indicate the tempo and dynamics (including identifying any changes to these elements).

As part of NAIDOC week students were asked to complete a rewrite of Justine Clarke’s song ‘The Gumtree Family’ in small groups.  Their rewrite needed to include an animal found in the Noranda bushland, and to use the Noongar translation of that animal.  Students then performed their song to the class integrating various classroom percussion instruments.

As part of NAIDOC week students listened to a recording of ‘Concerto for Didgeridoo: Water’ by Sean O’Boyle and recorded information about the elements of music and how these elements were combined to create mood and context.  Following this, students used this information to write a short paragraph or two reflecting what could be happening if the music was telling a story.

Students in Year Five have been playing arrangements for a variety of songs.  Playing their part accurately and in time with others has been the focus.  Arrangements include simple melodic and percussion riffs as well as harmony.  Students were asked to write a simple melodic riff one bar in length relating to the theme of a ‘Hot Summer Night’.  Their riff was then played as part of a class arrangement of the song ‘Hot Summer Night’.

On August 30th the school choir participated in One Big Voice at the RAC Arena.  This was an incredible experience performing alongside thousands of other primary school students! 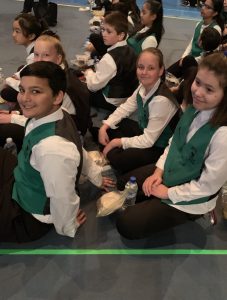